It's a nice moody rainy day here in the northwoods. It's been beautiful sunny and warm weather lately, but this morning we had much needed rain falling. Opened the window just so we could listen to it in our bedroom as we were waking up. Kind of love rainy mornings sometimes. ;)

But today I'm finally getting to the sunny post I wanted to share about all things pineapple! Our sweet Annie-girl recently had her 12th birthday and she wanted all things pineapple as she just adores them. And I don't meant just to eat...but also just loves the pineapple for itself. Lol Her bedroom has lots of pineapple knick knacks and she has pineapple craft paper, pillow, key chains, jewelry holder ...well you get the picture.  So I talked to her about her birthday menu for her party with her friends. And she wanted her favorite kind of pizza which is basically cheese with some pineapple on it, fresh pineapple on the fruit plate, pineapple guacamole, pineapple punch and pineapple upside down cake for her birthday cake. So being a loving Mama (who is kinda in to pineapple too) I obliged on all counts. And in case you're a pineapple lover too, I thought I'd share some of the recipes. 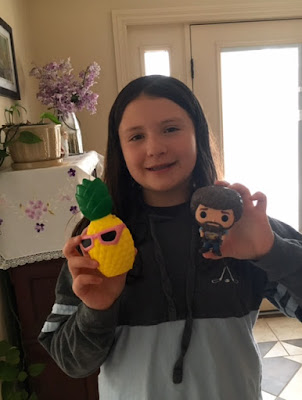 The birthday girl is also obsessed with Bob Ross (the painter that was on PBS long ago) - which I find hilarious. Here are some party details first: 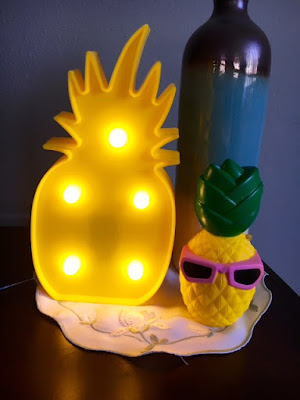 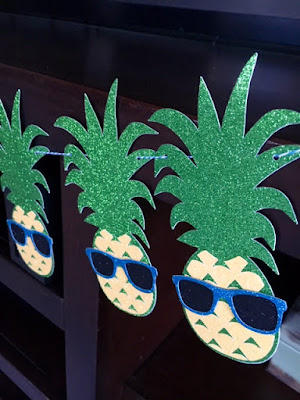 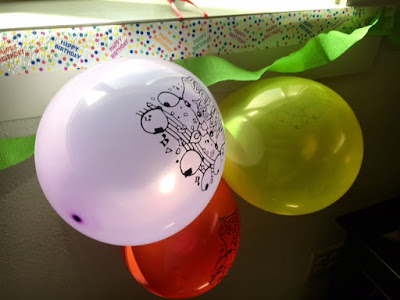 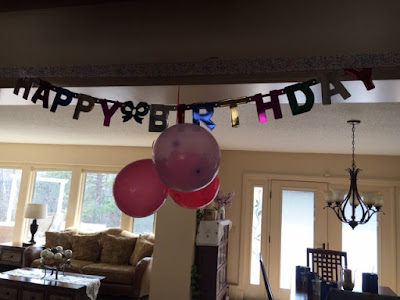 We decorated with balloons, streamers, banners and some pineapple accents as well, of course 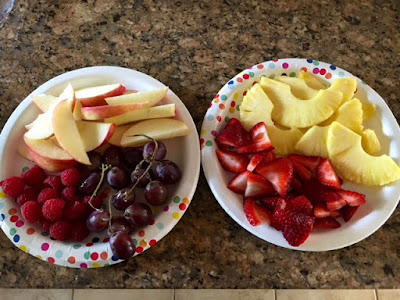 When the gals started showing up we had some chips, treats,  and fresh fruit (with pineapple) to munch on. Annie picked to do an escape room for her party so girls came to our house first and Annie kind of went out-of-order and opened up gifts first because the girls wanted her to 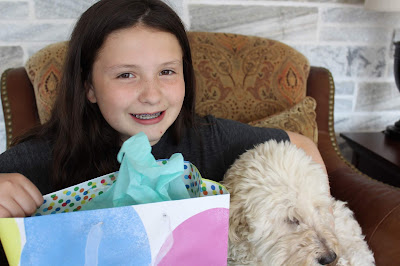 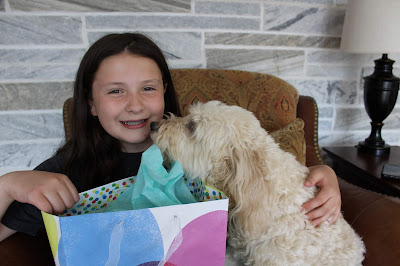 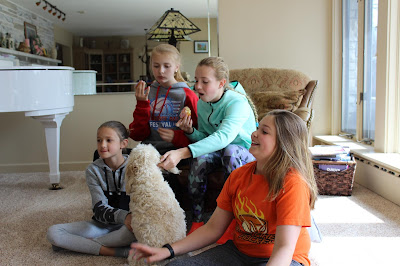 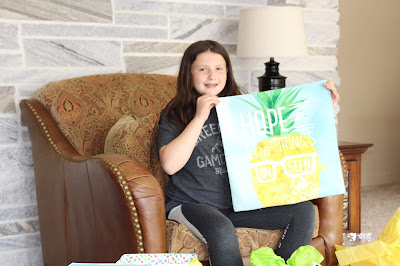 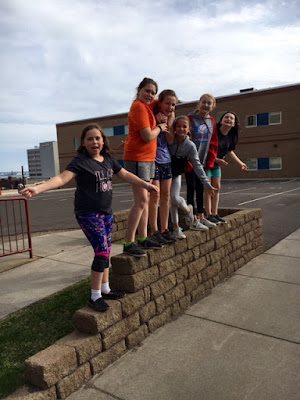 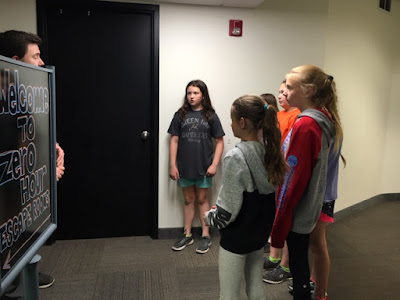 We loaded the crew into my car and went to the escape room place. If you don't know what it is - an escape room is a place that has different themed rooms where they lock you in and you have to look for clues and solve puzzles in order to move forward in the game and ultimately escape. You have a 60 minute time limit. Annie's group did the "enchanted forest" theme game. The above pic shows the dude that ran that game explaining the rules to them. 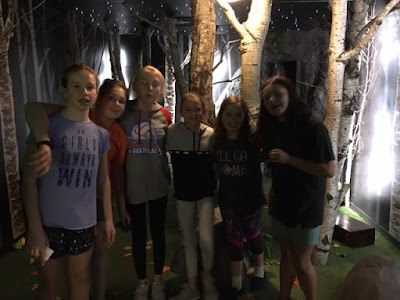 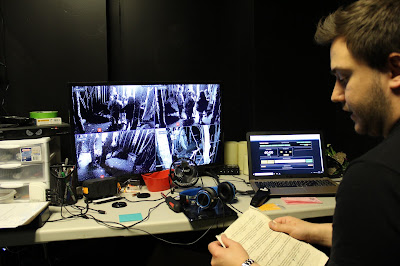 They were locked in a room that actually led to another room too - and it was filled with real trees and had rocks, chests to open, and other props. We got to watch behind the scenes as the guy running the game could watch and hear everything they were doing by camera in a different room. He could communicate with them because they had a screen in their room. They could ask him questions and he could answer or give clues or hints to help - if he felt like it ;) 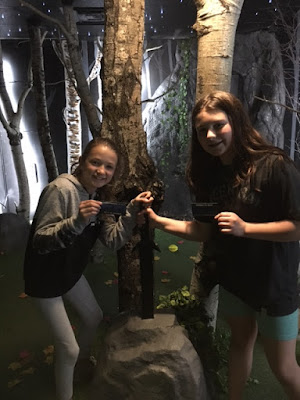 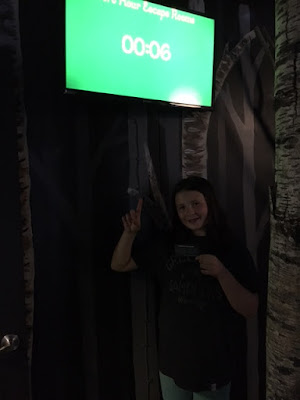 They finally solved a final riddle (with some help thanks to computer dude) with 6 seconds left and found the sword and put it in the stone and it unlocked the door. Phew! That was close.
Now that we're done partying...on to the food and recipes: 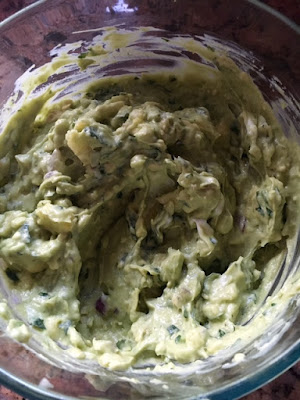 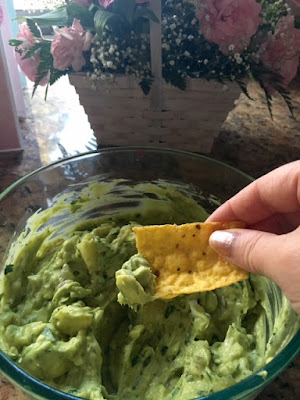 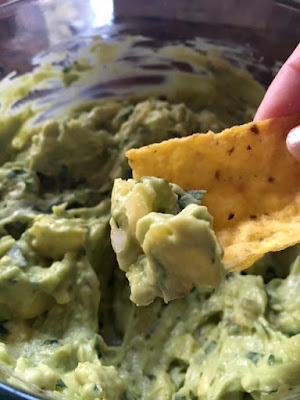 First up, the Pineapple Guacamole: I took 3 avocados and mashed them with a fork after squeezing the juice of 1/2 to 1 lime over them. I also sprinkled them with salt and pepper. I added a Tbsp or 2 of chopped red onion, a handful of cilantro chopped up, and about 1/4 cup of sour cream. Stir all together and then add in some fresh pineapple chopped into tidbits size.  Eat it all up with some tortilla chips - yum!! 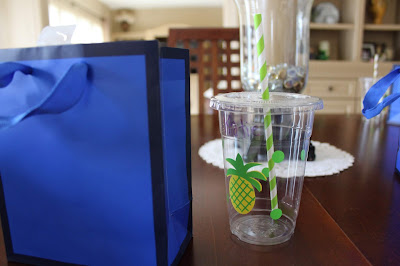 Next up the pineapple punch. I didn't take a photo of the punch itself. But wanted to share the favor bags we gave to the girls that came to the party. Each Gal got a pineapple cup with their name on it and we used them for the punch. Each bag contained some candy, pineapple chapstick, pineapple hair ties, a pineapple charm, and paper pineapple straws. Thank you to Etsy for all the pineapple themed favors - including the cups!

For the Pineapple Punch:
In a large bowl I took about 64 oz of unsweetened pineapple juice. And added in about 32 oz of orange juice (pulp free) and as much Sprite soda as you want to make it fizzy as you like. Served it up with a big ladle. They started digging in right away so I didn't even get the orange slices or cut up strawberries into the bow, but you could also add fresh fruit like that to the punch too. 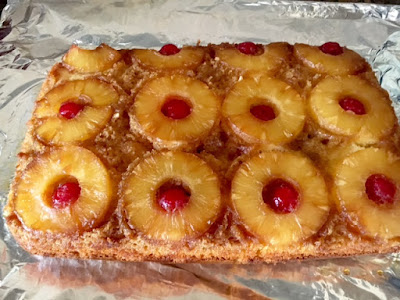 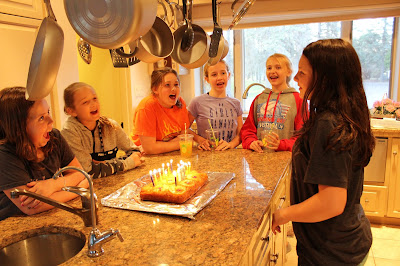 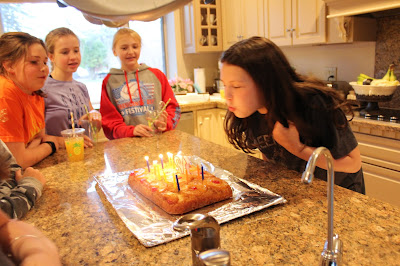 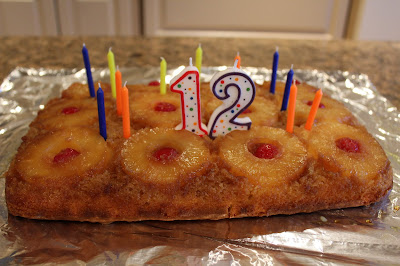 And last up - couldn't end any party without cake right? I was running short on time that day, and normally I would have made her cake from scratch but instead I used a yellow cake mix. But I added some pumpkin pie spice to the dry mix (I'm telling you it makes all the difference in flavor!). The from scratch recipe you can find under the Annie's birthday board on my pinterest called for that spice in it so I just added to the box mix and it was extra yummy!

So for the Pineapple Upside Down Cake:  Preheat oven to 350*. In a 13x9 pan melt 1/4 c. butter. Melt this in the oven. Once melted take it out and add 1 c. brown sugar all over the butter. Then place pineapple slices (reserve the juice in a measuring cup) in rows across cake and add a maraschino cherry in the middle of each slice. Press all gently into brown sugar. Make the cake mix as the box suggests but substitute the water with the pineapple juice from the can of pineapple slices (add a little water if it's not enough liquid according to box directions). Pour the batter over the pineapples and bake according to the cake mix box. Serve cake with whipped cream or ice cream. Or in our case we offered both. ;) 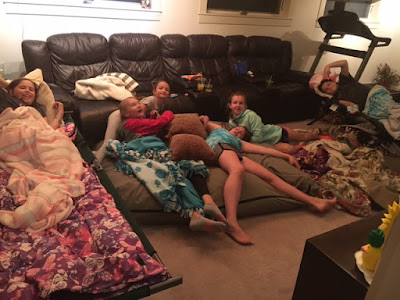 The Girls then set up their slumber party down in our media room. I think it was another successful birthday in the books...pineapples and all
xoxo

Posted by carrie@northwoods scrapbook at 2:01 PM