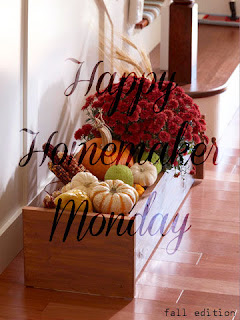 Happy Monday to you!

It was a busy and fun weekend here. How about in your world? Friday night I went to a musical at my kiddos's school with my Mom, daughter and some friends of ours. Then Saturday I went to lunch with some girlfriends and that night my Hubby, kiddos and I  met up with some friends of ours for dinner and after they came to our house to have goodies and play cards and hang out. It had been their daughter's birthday so we gave her some gifts then too. ;)

Then yesterday I went to a family friend's baby shower. Throw in some hockey practices, running some errands and cleaning house and the time flew by! So here we are back to a brand new Monday. I hope for all of you that it's a blessed week ahead...


THE WEATHER OUTSIDE IS:

Today is cloudy and gray. It's supposed to hit the 30's and then should be in upper 30's or low 40's a lot of this week - so a bit warmer. We may get some rain tomorrow and then the later part of the week potential for more snow.

ON THE BREAKFAST PLATE THIS MORNING:

I still have some of my spiced pumpkin "O's" cereal so I had a small bowl of that and some coffee.

RIGHT NOW I AM:

I'm listening to some Christmas music on Pandora (yes the time has come for all things Christmas music as far as I'm concerned - Lol). I'm working on my planner and daydreaming out at the snowy white and gray looking day out my window. I'm contemplating some of the dishes for Thanksgiving which I can hardly believe is next week already!!  I'm also smelling my bone broth simmering in the slow cooker. I had made a dish with rotisserie chicken over the weekend and I shredded up the rest of the meat and put it in the fridge. I took the chicken bones and threw them in the slow cooker with onion, chunks of carrots and celery, some garlic, parsley, poultry seasoning and other spices - covered it all with water and will let it slow cook all day. Tonight I'll strain out the bone broth and make some homemade chicken noodle soup with it and the shredded chicken in the fridge.

AS I LOOK OUTSIDE MY WINDOW:


I can see that we have an actual little layer of ice on the bay as it looks all white with the snow we got over the weekend.

AS I LOOK AROUND THE HOUSE:

Still clean from this weekend. Doing laundry and need to load a few more dishes from making that bone broth this AM. I need to change some sheets yet too.  Need to pick up my daughter later since my son has hockey tryouts.

Another busy week. My son has hockey tryouts a lot of this week. My daughter has practices and a game. She also has an ortho appointment. We have some hockey tournaments coming up already soon too! And lots of the other usuals this week: MIL time, my Mom time, making food for my FIL, my exercise time, religious ed, errands, some final things I need to do for completing my hospice certificate. I've started some Christmas shopping as well and I'm working on my planner for some of that too.

ON THE TV TODAY:

Dancing with the Stars, Gold Rush, Cooking shows, Survivor, The Good Doctor, This is Us, Outlander, Greys Anatomy, Hallmark movies

ON THE MENU THIS WEEK:

TUESDAY: easy night (not sure yet?) - hockey game

WHAT I AM CREATING AT THE MOMENT

Finishing up my Grandpa's scrapbook. Getting legacy box filled with old slides to send in. Working on project for hopeful planned future Etsy store.

NEW RECIPE I WANT TO TRY THIS WEEK:

TIP OF THE WEEK:

Hilarious - and kind of genius, don't ya think? 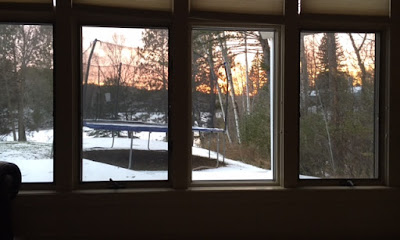 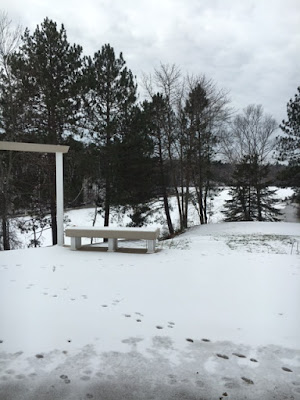 Our northwoods this AM - see the snow on the layer of ice on the bay? 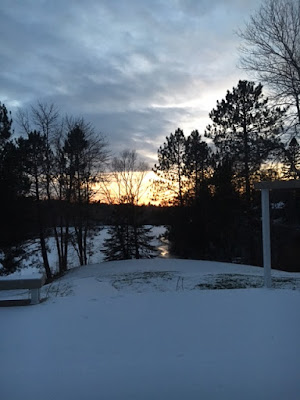 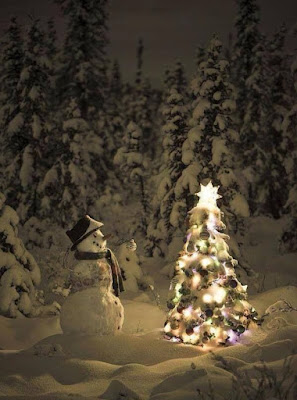 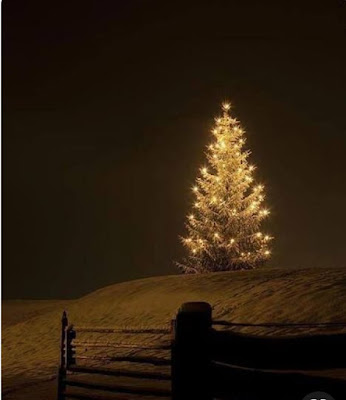 It makes me think of twilight and evening time in the near future when everyone's twinkly Christmas lights will be on outside in the snow. Everything becomes so quiet, peaceful and still when the world is cold and covered in snow. I love that... 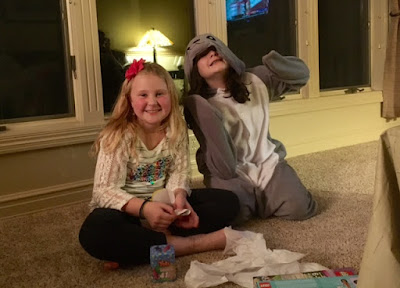 Our crazy daughter hamming it up in her seal "onesie" and our friends' daughter smiling by some of her bday gifts she opened here the other night  ;) 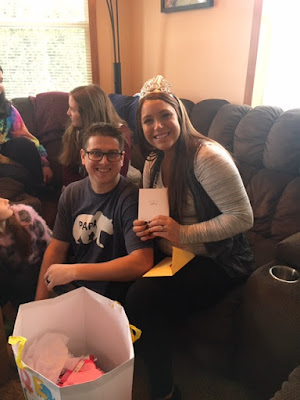 Family friends of ours that had their baby shower yesterday. They know they're having a girl - so excited for them. She'll be here soon! 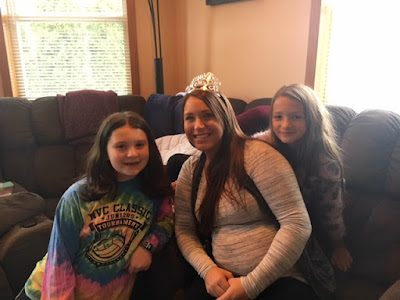 My daughter and her cousin posing with the Mommy-to-be I'm linking with Sandra of Diary of a SAHM for Happy Homemaker Monday.

Posted by carrie@northwoods scrapbook at 9:40 AM