First of all, I would like to thank you all for the thoughts, prayers and words of support this week. They went right to my heart and they definitely worked as my biopsy went well and the results turned out to be benign (thank you Lord for answered prayers!).

But next of all, I would like to share one of the recipes I've been meaning to share for a while. I worked on a post for the German puff pancakes - but something happened to it? So I will hope to post that one tomorrow. But for tonight I will share this one for BBQ apricot chicken. I actually got this recipe from watching Valerie Bertinelli's cooking show on the food network. I like her show and this looked so good that I had to give it try. It didn't disappoint! 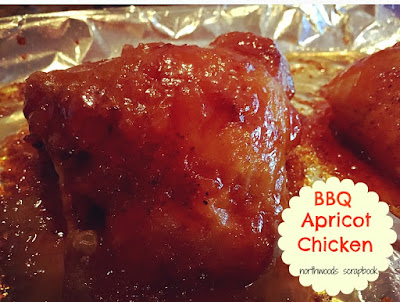 I really wanted to make this with boneless chicken thighs - but I ended up grabbing bone-in instead. The sauce was SO yummy!! The chicken gets seasoned well and roasted first. Then the sauce is glazed over it for the last minutes of cooking (broil at the end) - and extra sauce left on the side to eat with the meal. I liked the sauce so much I put some of it on my baked potato too! Lol 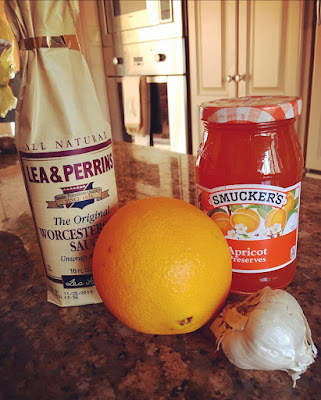 Here are just a few of the ingredients used in this dish. Another one of the ingredients used in this recipe, that I forgot to grab, was a fresno chile (or could use a jalepeno) - so I didn't add that. But I did add a bit of red pepper flakes, so it was still sweet but a little spicy too.  For a link to the recipe page click here.  I will also just list the recipe at the end of this post. 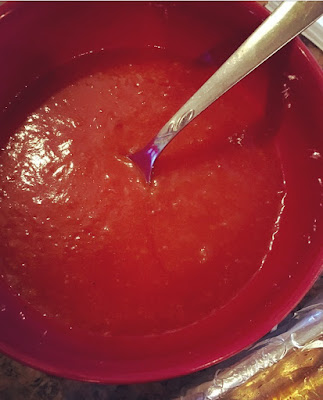 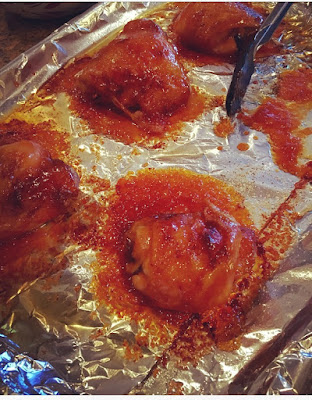 I didn't grab many photos when I was making the chicken - but here is the yummy (& pretty) sauce that I slathered all over the thighs at the end of cook time to broil them. It makes such a yummy sticky glaze on the skin. 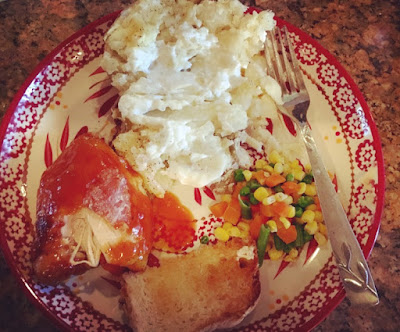 We enjoyed ours with a simple baked potato, mixed veggies and buttered toast. 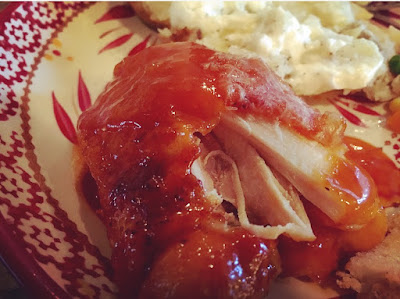 Isn't that such a pretty jeweled glaze on that piece of chicken? ;)  The recipe also says to blend sauce in a blender. I just used my hand immersion blender and blended it right in the saucepan that I cooked the ingredients in. Here's the recipe. Enjoy!!

For the apricot BBQ sauce: Heat 1 tablespoon canola oil in a medium saucepan over medium heat. Add the onions and cook until soft, 3 to 4 minutes. Add the chile and garlic; cook an additional 2 minutes. Stir in the apricot jam; cook until the jam melts, 3 to 4 minutes more. Pour in the orange juice and cider vinegar, bring to a simmer, and then add the ketchup, honey, Dijon and Worcestershire. Adjust the heat to medium-low and simmer, stirring often, until thickened, 15 minutes. Remove from the heat and let cool for 5 minutes.
Transfer the sauce to a blender and puree until smooth. Add salt to taste. Remove 1 cup for basting the chicken; reserve the rest for serving.
For the chicken thighs: Preheat the oven to 375 degrees F. In a small bowl, stir together the smoked paprika, 1 tablespoon salt and 1 teaspoon pepper.
Place the chicken thighs on two foil-lined baking sheets. Lightly coat the thighs with canola oil and sprinkle liberally with the spice mixture on both sides.
Bake until the chicken is cooked through, 35 minutes. Turn the oven to broil. Baste the chicken with BBQ sauce and broil until the sauce has caramelized and an instant-read thermometer inserted into the chicken reads 160 degrees F, about 2 minutes. Remove to a platter, let rest for 5 minutes
Sprinkle the chicken with parsley, and serve with the reserved BBQ sauce.

Posted by carrie@northwoods scrapbook at 7:58 PM

I've been featured at Scrapality